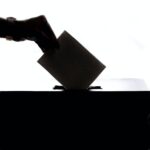 Promising is the renewed interest in voting and our government.  It does however raise several questions about voters.

https://www.c-span.org/video/?517190-2/washington-journal-news-headlines-viewer-calls     –https://www.c-span.org/video/?517190-2/washington-journal-news-headlines-viewer-calls–end of c-span info–
7:42AM–paraphrase–caller–We should have 3 political parties…..Democratic, Republican, and Independent….
Well, we do; and in FACT we have more than 3 political parties.  A few members of the electorate are so dramatically ignorant on this topic thanks to the propaganda from the Republican/Democratic duopoly and the corporate-owned-politically-influenced MSM.  Even C-Span insists on pigeon-holing callers into these 3 categories, when callers may better call in as interested citizens.
Another issue raised is whether non-citizens should be allowed to vote.
After an excited coterie of youngsters raised some dust as they united to go en masse to commercial interests to beg for their right to vote, that anomaly seems to have awoken a bit more.
To insist on a citizen choosing a political Party, the illegitimate notion of the importance of political Parties is elevated to a level where political Parties control their voters rather than voters controlling their political Party, or no Party if so chosen.
Our common-core style of education has also contributed to breath-taking ignorance on the topic of self-governance, in which history is indoctrinated into the public as written by the winners rather than FACTually.
Myopic cliques add to the problem, in one person’s view.  The validity of, for example, CRT is overshadowed when one wonders about the misconception, for example, sold by the Democratic Party that MLK, Jr. was somehow supportive of capitalism during the 2020 Presidential campaign.  FACTually and in his own words, a simple web search would informed the ignorant that MLK, Jr. may more nearly have identified as a democratic socialist.  It would appear that those self-promoting byway of meritocracy stooped to said bait-and-switch to further undermine information for the electorate.https://mlkglobal.org/2017/11/23/martin-luther-king-on-capitalism-in-his-own-words/

Preoccupation over educating about events of 400 years ago may overshadow more recent history that is also crucial and as relevant.
This relates to the Democratic/Republican duopoly (Capitalist Party) because the Democratic Party has used race as a clarifying plank in their platform at the same time such history is misinterpreted.  But that is precisely the self-interest President George Washington seemed to speak to—In his farewell Presidential address, George Washington advised American citizens to view themselves as a cohesive unit and avoid political parties and issued a special warning to be wary of attachments and entanglements with other nations. … In foreign affairs, he warned against long-term alliances with other nations.—end of documents.gov info
Each of the branches of the Republican/Democratic duopoly rely on cliches in attracting supporters.  Individuality isn’t helpful to hierarchy.
https://psyche.co/ideas/autistic-people-challenge-preconceived-ideas-about-rationality?utm_source=Aeon+Newsletter&utm_campaign=e03eae3d3f-EMAIL_CAMPAIGN_2022_01_10_06_08&utm_medium=email&utm_term=0_411a82e59d-e03eae3d3f-70464341  –Autism researchers and society in general have been largely focused on deficits and challenges in autism, with less regard for areas in which Autistic people might tend to outperform non-autistic people. Based on the above examples and others, it is possible that enhanced rationality is yet another part of the constellation of characteristics associated with autism (though an understudied and not well-recognised one).–end of psyche info–
Considering our political arena in 2022, that Establishment is worried about the mental health of Americans seems odd.  With historic substance-abuse epidemics in the USA, too often industry-enriching, demands for homogenization of the public pertaining to mental health,  could be questionable.
Received from popularresistance—https://mailchi.mp/popularresistance/pz2wfu59ft?e=1b0a9c0541    —

The Indigenous Grandmothers Who Stopped A Pipeline

The electorate would benefit from an honest political debate with candidates, but we haven’t had one in a very long time.  Ross Perot frightened the Republican and Democratic duopoly when he caught the attention of the electorate in 1992.  And so censorship of 3rd-Party candidates became the norm.  Chipping away of different voices is the work of hierarchy in the system that is capitalism.  We will be down to one of the D or R political Parties in control, at which point the dictatorship will be complete, in one person’s view.https://www.npr.org/2022/01/13/1072765939/republicans-threaten-to-no-longer-participate-in-traditional-general-election-de
https://www.youtube.com/watch?v=VRr60nmDyu4  –A Giant Sucking Sound : Ross PerotWe deserve better.      https://www.lwv.org/newsroom/press-releases/league-refuses-help-perpetrate-fraud–.
Neither the Democratic or Republican Party should be held up as the backbone of democracy.  In FACT, to do so totally misunderstands the place for political Parties in our government that should instead be about the electorate.
The joke of the Former USSR was the 1-Party system that was the Communist Party.  It is not better to have a 2-Party system that is the Capitalist Party meandering into an eventual 1-Party system.

« DOES ANYONE REMEMBER THE GIANT SUCKING SOUND?
STRIVING FOR FREEDOM »