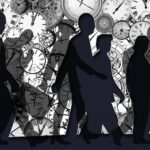 One could conclude that local-community people don’t fare so well under our system.  —  https://twitter.com/dallasgoldtooth/status/1570212382718464002?cn=ZmxleGlibGVfcmVjcw%3D%3D&refsrc=email    –Absolutely important to read and follow this thread and account.

is a Lakota matriarch who is challenging an anti-protest law in Louisiana – which was used to wrongly arrest her!–end of tweet—

« NATURAL RIGHT TO THINK
CAPITALISM AND YOUR DOG »