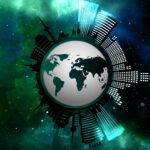 Or in carefree and endearing terms of commercial governance, fun with words.

« LOOK BEFORE YOU LEAP
GOVERNMENTAL INNOCENCE »