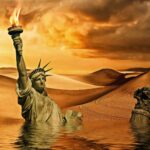 Disingenuous Conservatives who hypocritically attack Choice which is an innate human right of women as apparent by biology from The Creator (you can’t challenge FACTS) would better build a society that enhances the life of women and children, if said Conservatives wish to cut down on abortions, rather than forcing women through a filter of patriarchal control that implies human rights violations, with said violations based on the mechanics as preordained by The Creator.

When US elections are run by political Parties, democracy doesn’t feel honored.