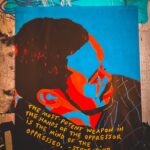 Capitalistic PR indoctrinates into prioritizing material possession as the height of human achievement.  That this possession comes with a contrasting decrease in principles of fairness and justice isn’t questioned.  A system of education that would be better used to teach self-reliance, autonomy, and ability to self-govern is instead used to train into compliance to hierarchical demands and consumerism.  We could explore the possibilities of a human life other than as a component in an economy that so dramatically buoys interests of hierarchy at the expense of everyone else.  Put plainly, what’s in it for everyone else?

I’m sad for the activism of the past that has been funneled by common-core education into capitalistic compliance, with youngsters of 2021 clueless about the change away from support for human and environmental rights  —  https://mailchi.mp/nader/thanksgiving-thanks-for-the-early-nader-raiders-cgqlxhjko8?e=cfd1bea9b5     –They didn’t pontificate or boast. They just improved the health, safety, and economic conditions for the American people. The Washington Post called them Nader’s Raiders – law, medical, graduate, undergraduate, and even high school students came to Washington between 1969 and 1973 to join with me in important drives for justice.The first group came in 1969 to expose and reform the moribund Federal Trade Commission (FTC) that had turned its back on consumers.
Then came about a dozen law students for what turned out to be an orientation meeting in the summer of 1970 in a spare suite of offices across from the bustling Washington Post headquarters. They sat around me as I offered one subject of injustice after another for their choosing. Some who selected their work that summer and the following summer, stayed at it for 40 to 50 years!Chances are you’ve had your defective motor vehicles recalled because of this tenacious auto industry watchdog,
There were thoughtful and compassionate high school seniors at the Miss Porter’s School in Connecticut, interested in doing something about nursing home abuses.There are plenty of opportunities to break new ground, to turn Congress around and free it from its corporate paymasters, to define your future work as full-time citizens building a deep democracy resilient against the cruel winds of approaching autocratic storms. If you are interested in this kind of work send your resumes and chosen areas of interest to info@csrl.org.–end of ralphnader info–
Third-Party politicians such as Nader and for example Ross Perot have been undermined by the efforts of the Capitalist Party in the personification of the Republican/Democratic Party.  After Ross Perot so nearly won the attention of voters years ago, as has Bernie Sanders more recently, the US Capitalist Party censored away by campaign strategy, voices of reason.  Many people in 2021 aren’t aware of how predictive was Ross Perot’s “giant sucking sound”, as he described the draining of the US economy by capitalism.–
https://www.youtube.com/watch?v=W3LvZAZ-HV4          NAFTA 20TH ANNIV – PEROT GIANT SUCKING SOUND         Especially watch Republican Bush and Democratic Clinton of the US Capitalist Party smirking derisively at the Independent speaking truth to power.https://www.salon.com/2019/07/21/ross-perot-was-ridiculed-as-alarmist-in-1992-but-his-warning-turned-out-to-be-prescient_partner/  —Perot’s warning“You implement that NAFTA, the Mexican trade agreement, where they pay people a dollar an hour, have no health care, no retirement, no pollution controls,” Perot said during the second presidential debate in October 1992, “and you’re going to hear a giant sucking sound of jobs being pulled out of this country.”The response to that remark was fierce and immediate. Economists argued he was dead wrong as they sang the praises of free trade. Perot’s warning, however, resonated with workers, unions, environmentalists and people in manufacturing towns across the country, helping him earn 20 million votes or about 19% of the total.–end of salon info–The red herring is the propaganda of the economists as they “sang the praises of free trade”, which has nothing to do with capitalism.  This song still goes on into the ears of indoctrinated and money-beguiled Americans.https://ballotpedia.org/Fact_check/Are_the_presidential_debates_rigged_in_favor_of_major_party_candidates  –On February 18, 1987, Paul Kirk, the national chairman of the Democratic Party, and Frank Fahrenkopf, the national chairman of the Republican Party, held a joint press conference to announce the creation of the CPD. They announced that beginning with the 1988 presidential campaign, candidates from their parties would only participate in general election debates organized by the new commission. The CPD’s board of directors were selected by the two parties, with Kirk and Fahrenkopf serving as co-chairmen.[3]Nancy Neuman, president of the LWV, criticized the parties for assuming control of the debates, noting that unlike the LWV, the two parties had self-interested motives for excluding third-party candidates. “I think they’re trying to steal the debates from the American voters,” she said.[3]–end of ballotpedia info–

Capitalism uses money to advance the interests of hierarchy, and the insinuation of this system as ours, which it is not, combines corruption of money with the authority of government.  On a continuum this is organized crime.  Consider the following 2 examples of use of money as tools of governmental influence—Example1—   https://www.democracynow.org/2021/11/26/meet_mansoor_adayfi_i_was_kidnapped?utm_source=Democracy+Now%21&utm_campaign=918939079a-Daily_Digest_COPY_01&utm_medium=email&utm_term=0_fa2346a853-918939079a-191783145   –https://www.democracynow.org/2021/11/26/meet_mansoor_adayfi_i_was_kidnapped?utm_source=Democracy+Now%21&utm_campaign=918939079a-Daily_Digest_COPY_01&utm_medium=email&utm_term=0_fa2346a853-918939079a-191783145
–end of democracynow info–
Example 2— https://www.cbsnews.com/news/texas-abortion-law-bounty-hunters-citizens/   –That financial incentive was singled out by Supreme Court Justice Sonia Sotomayor in her dissent late Wednesday after the Supreme Court declined to block the controversial law. In effect, Texas lawmakers have “deputized the state’s citizens as bounty hunters, offering them cash prizes for civilly prosecuting their neighbors’ medical procedures,” she wrote.–end of cbs info–

Capitalism is about profits for hierarchy and a system based on these principles rather than on principles of justice and equality will result.  Received from popularresistance–

My Grandfather Founded The National Day Of Mourning

Six Thanksgiving Myths And The Wampanoag Side Of The Story

Received from lakotalaw—-I write to you today from San Francisco, where I’m on my annual trip to Alcatraz. Between 1969 and 1971, I joined relatives from many tribal nations in occupying this island off the coast of California in the name of Indigenous reclamation. This week’s holiday, which we Lakota call Thanks-taking, is an optimal moment to reflect on our history. How can we build a better future together? Now is the perfect time of year to support Indigenous causes, uplift Native voices, and give back to Native communities. Our Wopila Gathering, coming right up on Giving Tuesday, Nov. 30, will afford you an unprecedented opportunity to do exactly that. We created this first-of-its-kind celebration to unite Indigenous peoples across Turtle Island and to give you a space to learn, become inspired, and grow the movement for Indigenous justice. Please donate what you can at our brand new livestream page to support the Wopila Gathering, amplify Native voices and support Lakota Law’s mission. Help spread the word, too, by creating your own fundraiser to share with your family and friends.Watch: Our new, short video describes more about Tuesday’s big event. I can’t wait to see you there!By now, you’re well aware that the Thanksgiving origin story we were all taught in grade school is a harmful myth designed to obscure the taking of Indigenous lands and the genocide of our peoples. The pilgrims were not heroes, and these lands were never given freely to colonizers.

There is much to contemplate — and, yet, there are still many things to be grateful for as the sun sets on 2021. This year, we saw Deb Haaland’s elevation to lead the Department of the Interior as the U.S.’s first Native Cabinet secretary. Then Standing Rock Nation elected our friend, Janet Alkire, as its Chairwoman. And, just last week, Charles Sams III became the first Native man confirmed to direct the National Park Service.

All of these talented leaders bring much needed perspectives to their positions, and we’re primed to make a huge difference in 2022 on issues like #Landback, protecting and maximizing the Native vote, and providing new and better options for the children of Lakota nations like Cheyenne River and Standing Rock.

That’s why it’s so important that you’re here with us! Yes, the gifts and fundraisers you make now and on Giving Tuesday will support both our work in 2022 and all the talented presenters lined up to share with you at our Wopila Gathering. Crucially, your gifts provide us real power to build on the momentum we’ve captured this past year. None of these advancements happen without you. Thank you for caring deeply about our Native sovereignty, culture, and lives.Wopila tanka — we’re grateful, always, for your support!
Madonna Thunder Hawk
Cheyenne River Organizer
The Lakota People’s Law Project—end of lakotalaw info–

We should learn from the experts—–https://twitter.com/americanrivers/status/1464278130806378497 –Indigenous communities and leaders have brought their knowledge, laws, and traditions in land management and stewardship to safeguard climate-critical open space and forests. #NativeAmericanHeritageMonth#DelRiverEJ–end of twitter info–
We have much work to do.