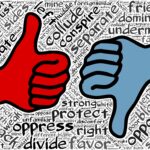 The worry of inflation would feel more easily handled if it was addressed as price gouging or monopoly, for which laws are in place.  When it is labeled as inflation, the predatory behavior can be hidden behind the curtain of the wizard.  This is one reason one is charmed by the adorable presumption as discussed on C-Span this week, that ubiquitous monitoring of the US public for anxiety should become commonplace.  A better policy would be for competent governance that doesn’t undermine Americans and contribute to anxiety.

C-Span hosted a discussion about the viability of Medicare and Social Security.  Following are several topics never discussed but that are important —

*Social Security benefits are paid by the taxes from current workers

*After products were manufactured by foreign nations, the US public was further undermined by imposition of the Trump tariff that placed a tax on imports, when the US no longer manufactured products

*Commercial interests however were not so harmed

Perhaps we should speak to our so-called Representatives about this.  Perhaps these policies and laws are in place due to the corruption in the electoral process called Citizens United that enriches politicians and guarantees their legislative loyalty to big-money donors rather than to We The People.  Also of interest is the collaboration between lawmakers and big-money donors in www.alec.org in which laws are considered.

We also need a system that supported a vote for the candidate of the choice of the voter, rather than shoe-horning the vote of the voter into either of left or right non-fitting fiasco in the Democratic/Republican duopoly.

https://popularresistance.org/11-million-per-minute/   –Lee Camp reports on an IMF study from 2021 that found that Big Oil receives $11 million per minute in subsidies. In other words, we’re all paying for ExxonMobil, Shell, British Petroleum, and their peers to continue doing business by polluting the land, water and atmosphere.

Exceptionalism as a personality-trait status doesn’t equate with quality of life.

US Quality of Life Now Ranks with Bulgaria

New Rail Deal May Still Be Doomed Over Scheduling Issues

‘We’ve Incentivized Corporations To Go After This Price-Gouging Strategy’

The Return Of Fascism