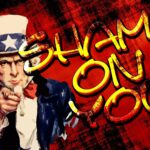 A definition of insanity is to continue to do the same thing while expecting different results.  C-Span  hosted a discussion about electoral reform, while basing the discussion on reliance to corporate political Party duopoly control, rather than on control by We The People.

Many political candidates run for public office against the headwinds of Establishment insinuation.  This doesn’t reflect democracy.

Tim Stewart on Oil and Gas Production in U.S.

U.S. Oil and Gas Association’s Tim Stewart talked about oil production in the U.S. and criticism of the industry by the Biden administration.

Must we continue to pretend that corruption and greed aren’t deeply rooted in the US government?

Have we lost the ability to recognize corruption?  Or possibly our notion of democracy is the ability to elbow one’s self into access to the feeding trough.

The billionaires buying the midterm elections

Lumumba’s Politics Are What Really Need To Return

Ghost Stories Of Capitalism: Watching The Shutters Of Austerity Close

Biden The Warmonger Gets Played By The Saudis

Evo Morales: UK Role In Coup That Ousted Him

Ongoing war stance from the USA is a reason austerity is demanded from We The People, to protect “American interests overseas”, which are interests of oligarchs.

https://countercurrents.org/2022/07/ukraine-update-west-can-not-sustain-prolonged-conflict-in-ukraine-says-pentagon-supplier/  –The West does not have the stockpiles of weapons needed to sustain a prolonged military campaign in Ukraine or elsewhere, the CEO of one of the Pentagon’s main defense contractors has warned.

Indoctrination of a public into accepting a lifestyle that feels suicidal (Climate Change and highway carnage, as examples) that results in transfer of the wealth of the nation from the 100% to the 1% is a topic that needs debate.  —  https://www.treehugger.com/car-free-vacation-spots-teach-livable-communities-5525908?utm_campaign=treehugger&utm_medium=email&utm_source=cn_nl&utm_content=28408972&utm_term=           —

What Car-Free Vacation Spots Can Teach Us About Livable Communities

The good, the bad, and the inequitable.

The title of the following Russell Brand conversation with Vandana Shiva is “(Proof) We Are Screwed”, and is curiously in opposition to the tone of the message.  The only “screwing” is presented as self.  In other words, one can be their own worst enemy.

[PROOF] We Are Screwed Jul 15, 2022 This week I spoke with Vandana Shiva about the current global protests, such as the Dutch farmers, and the historical push to curb the production of healthy clean food in place of more profitable GMO produce. #junkfood #bigfood #diseases

Third Parties continue to be censored out of voice, along with a predominance of US voters.

When US elections are run by political Parties, democracy doesn’t feel honored.

« WHAT CAN SOUTH AMERICA TEACH?
LANGUAGE CAN ENTRAP…CONSIDER CHOICE »