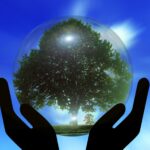 Is this about policing or the environment?  You choose.  Some people believe desecration of the environment is promoted within a strong police state.

By the way, what does it say when law enforcement facilitates environmental destruction?  This doesn’t feel like protecting and serving.

The following is presented in its entirety due to relevance and importance of information for the public.From

The news has spread around the country and around the world. On the morning of January 18, police began an attack on the Weelaunee Forest in south Atlanta. In this assault, they shot and killed a forest defender known by friends in the movement as Tortuguita.

Tortuguita, remembered by many as “fierce and loving,” was a Black and Indigenous anarchist. Their life was spent seeking a world without prisons and without police where people could care for each other and be in relationship with the natural world. This moving remembrance shares just a small part of their spirit and their story.

The Atlanta Police Foundation wants to clear hundreds of acres of forest to build a massive training facility that would include a mock city and be a site for police forces from across the country to come train in urban warfare. Tortuguita was part of the movement to protect the Atlanta forest and stop this project. The movement is centered in Atlanta and includes community groups, forest defenders, lawyers, activists fighting gentrification, racism, and police brutality, and neighbors of the forest. But the movement is not only in Atlanta. Everywhere that police oppress indigenous people to protect pipelines, everywhere that forests are cleared, everywhere that profit and control are valued more than life, this movement resonates. The struggle in Atlanta is all of our struggle.

You can learn more about this movement and how communities in Atlanta and around the country are responding in recent reports from Democracy Now and Rolling Stone. Police would like to blame their brutality on Tortuguita and their fellow forest defenders. There must be an independent investigation of Tortuguita’s murder.

Our hearts are filled with love, sorrow, and rage in solidarity with all those grieving their death.

If you are moved to gather or act in Tortuguita’s memory, vigils are planned in many towns and cities through the week. If there is nothing planned near you, organize something with your friends and invite your communities. Support the people arrested in the raid. The outpouring of love and solidarity feeds those grieving and gathering in Atlanta as they care for each other in coming days and weeks.

Here are some other ways to support the movement from the statement in Solidarity with the movement to stop Cop City & defend the Weelaunee Forest, endorsed by RTNA:

With love and rage in our hearts.

—end of rising tide info–Due to a quasi news black out on this topic from corporate-owned-government-involved MSM, one offers the following to inform those who care—–

Several observations from Upstate NY–*The Southern Tier of NYS is a hot-bed of responsible citizens*Local Sheriffs have advocated for a “crack down” on “activists” which some people see as responsible citizens*Local Sheriffs have expressed intention to avoid implementing action in compliance of gun-control laws*Local law enforcement has shot local gun owners due to perception of personal threat*If armed law enforcement feel threatened by local gun-toting individuals, why is the general public expected to accept such apparently threatening individuals in our midst why law enforcement chooses to avoid implementation of gun-control legislation?*Local Sheriffs have attempted a seemingly similar shooting range in a local rural neighborhood as is discussed in Atlanta*Local citizens (possibly considered “activists” by law enforcement) protested and the local town board upheld the wishes of the citizens*FACTually speaking, it’s not like local Sheriffs don’t have murky personal backgrounds, as reported on local media news reports*To maintain those in positions of power with questionable characters is helpful to capitalistic hierarchy*Expectation by Establishment of faith from the general public, that the guy with the gun is “good”, seems to be an intolerable burden upon the public
Perhaps one’s impressible mind has gone to a comparison between the police state necessity that appears to be similar for both capitalism and communism because one is reading

Situated between Central Europe, Russia, and the Middle East, Ukraine was shaped by the empires that used it as a strategic gateway between East and West—from the Roman and Ottoman empires to the Third Reich and the Soviet Union. For centuries, Ukraine has been a meeting place of various cultures. –end of gates info–

But whatever the origin of comparison, for one to read the above book about Europe and to not draw a conclusion that communism and capitalism are opposite sides of the same coin of dictatorship seems impossible.  NATO chauvinism toward other nations may be a deflection from the behavior in some member nations.  The best defense is a good offense, perhaps.

To read this book might also raise questions in minds about US involvement in the Russia/Ukraine War, as proxies as Blinken has informed us is the roll of the USA, if anyone cares.

Hear from those who understand the system from within.  —  https://popularresistance.org/why-im-not-running-again-for-city-council/            —

There is a vacuum of real left leadership, locally and nationally.

Elections are not the only, much less the primary, path to political change, becasue the political system is rotten from top to bottom under capitalism. Now, as the global crisis worsens, the rot spreads deeper and deeper, and the threat of further corruption by the far right hangs over us all. In India, the country I was born in, the far right is in power and rapidly consolidating it. In the US, the midterms were but a temporary reprieve, unless we get organized.–end of popularresistance info–