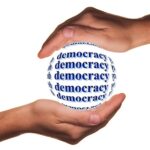 C-Span hosted a call-in on the topic of swing voters and independent voters and how they would vote on Tuesday.

Several apparently MAGA people called in to complain that the Trump rally was, according to their complaints, given short shrift pertaining to airing on C-Span after the Democratic Pennsylvania Senate/Governor campaign with Obama and Biden was aired twice.

In other words, MAGA presumption that it’s all about them denies democracy required in a representative republic  Eternal Trump rallies display as a bit dictatorial.

One was grateful to Pedro the host of C-Span to put this in context by reminding that Trump rallies are often aired on C-Span and many other MSM outlets.  This is an important FACT and TRUTH, considering ex-President Trump cheapens availability by quantity as ex-President Obama reinforces quality over quantity pertaining to exposure.  One might almost define eternal rallies as voter stalking.

In the current state of politics as flimflam shows, this is an important distinction.

The Cost of Not Going Co-op

Our Power Delivers Signatures For Referendum On Consumer-Owned Utility

Many voters cast their choice for Bernie Sanders in acts of logic.    —   https://portside.org/2022-11-05/our-economic-crisis-isnt-inflation?utm_source=portside-general&utm_medium=email              –Today, we live in an economy in which the billionaires are getting much richer while working families fall further behind. Unbelievably, while 60 percent of Americans are living paycheck to paycheck, we now have more income and wealth inequality than we have ever had in the history of our country – with three multi-billionaires owning more wealth than the bottom half of Americans.  While employers squeeze workers and their unions for cuts to health care and other benefits, the CEOs of major corporations now make nearly 400 times more than their average employees – the largest employer-worker gap in our history.